Agua started an interesting conversation on the email list regarding game recording, but the emails are not good for long discussions as each one brings a dozen of prior emails with it.
Here is what was said:

Jake wrote:Both Schoolboy and Blackboy seem very formidable opponents to be so much ahead of the competition, would be wonderful if they could show a few interesting moments for us here.

Agua wrote:Indeed they are Sir Jake and guess that's why we wish we were able to record the games in the competition so we could share them with the group.

Jake wrote:Normally I record my tournament games at the game or at night coming home, it is a good habit to recreate played games, helps memorizing. As far as sharing them I like to show the interesting moments if any, that is why I invited Schoolboy and Blackboy share what they feel interesting

Agua wrote:I agree that not all our players are comfortable with recording of games and that is why we have not been recording games. I do hope we will be able to record games at even some of our Tournaments, even if just games by players that will consent to having their games recorded.
I do agree it is very good for the sport and for the development of others and ourselves.
One player after the Tournament said he had played some spectacular games but he does not recall how to set them up, if only they were recorded he could share them or review them.
Recording should be the way forward.

Fabulous Kid wrote:Players might be thinkin other players they want to beat would study their game an av ideas an ways how to beat them. Knwing how a one play is a big help for a player but I don't av a prob with it still once everythin is recording..

Jake wrote:Those who started with books probably discovered that their "secret" moves were not secrets at all and in fact were not good in the first place! That is the benefit of studying and of recording - to discover moves and counter moves, to learn more, to go deeper - as someone stated "search for the truth". All that hiding just means you do not know and will likely never find out. The truth is the better player always is a better player, if everyone knew everything the better player will still be ahead - because he can think better, faster, more precise, has stronger stamina, he is innovative, keeps himself in shape, on and on. The art/knowledge is just a part of the game, the other part is sport - and there the stronger, the quickier, the luckier - he wins.  So you can keep yourself ignorant (that is the essence of hiding) or learning by sharing, it does not effect the outcome, only your expertise.

Agua wrote:Well said Sir Jake, I hope those that shun away from recording of games could see this but to be honest, they are not online. Most of those players don't even like the fact that we are playing online and getting exposed and learning.
They fear us getting better and becoming more competitive.

Jake wrote:The argument about recording as "teaching others how to beat me" is old, it just means the guy does not know how to record and makes pretenses about secrets. Your moves are known to your competitors the moment you played them the first time. They will not admit that but they know. The recording means a trade - you show them yours and they show you theirs

This follows by you preparing for that and finding holes in their games, and they do the same to you. The result is that your lines get better and theirs too - you all win, you all get stronger and more knowledgeable - this rarely effects places.
But the real learning is not in moves, the real learning is in discussions, in one-upmanship,  in understanding why a certain move is made, you go to the realm of plans, of ideas, of standard executions. There is more to Draughts than the regular game - you might decide different openings, play 11x11 instead of 12x12, play 10x10 game, Russian game, Brazilian game - etc. - simple learning the moves does not help there - understanding of principles, habit of study and absorption of ideas, readiness for new adventures does.

Sadikie wrote:Been really busy these last days, but i just stop to read through theses message. What i can say is well said Sir Jake. i sure hope all that's on the group list will spread the word and knowledge you have impart upon us. As you said its only ignorants why one would try to hide the knowledge. Its now here for all who have been in the wilderness to have and revel in.

Well, the conversation took an unexpected turn, all I asked was for Schoolboy and Blackboy to share interesting moments, it kind of expanded to include recording tournament games.
I would argue that recording a game for yourself is a great way to analyse your game for mistakes, you can do it during the game or the same night coming home while you still remember it and is "hot" with nuances of every little detail analysed during the game. You of course do not owe your recording to no one, up to you to share all or part of it with others.

Most players in Jamaica do not record, probably because recording was not known or never practiced. But thanks to Tiger a large group of players "discovered" Pool Checkers sites and jumped on the "study wagon" - and study they did, so much so that they are now feared by their rivals. I recall one player complaining privately that the top players do not share lines with him. He and others now have access to dozens of books, thousands of games that have enough lines to last them 20 years! But lines by themselves are only part of learning, the other part is understanding of the game, here Kaplan's books are essential.

This is really an interesting discussion. In Zambia we never new how to record games and its importance, but thanks to Jake and others who have opened our eyes. I created a recording form which we now use in tournaments.

Here is the recording sheet we used on the big board. It provides for 25 moves in each column, the small board sheets normally show 15 as their time limit is set at 30 moves for an hour. Of course this was good 40 years ago, obviously Sacks, who just played in the World Championship, knows the current trends.

One thing is important - these sheets are two-layered, when you write the letters are zeroxed on the bottom layer too, the top layer goes to the tournament and the bottom one to you, this way you have your recording to study or to prove result in case of a dispute. 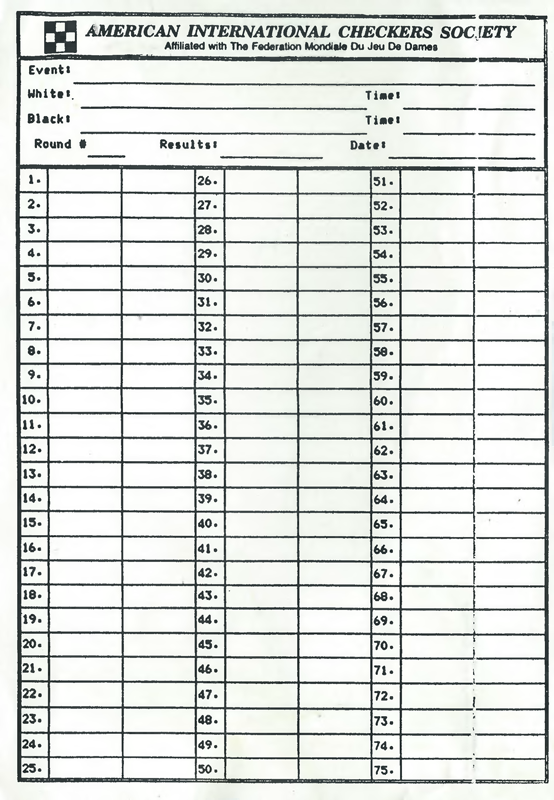 I still have the notation forms we used in St. Peters, in other ways, I have all the games I played whilst that side. I can see where I made mistakes and where I played well:D thus the beauty about recording games guys. I like this notation form Jake, I will copy and past it in word.

There is really no need to copy others, make something that works for you. For example the Pool checkers game rarely takes more than 40 moves, consider adding a couple empty diagrams on the form, this way guys could record interesting positions (with "o" and "x") and their solutions.

Here is a suitable image 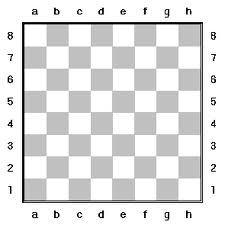 Players recording games and you can also see the results of the tournament and watch the games http://zambiandraughts.ucoz.com/ ! 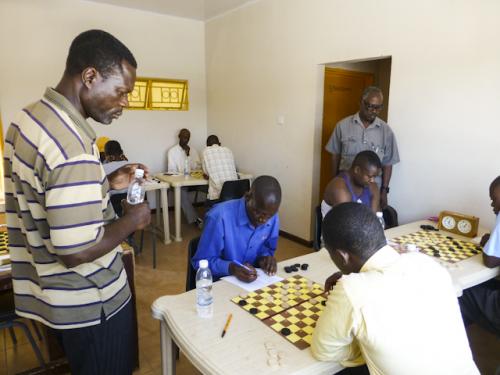 Nice place you have there

I do agree, nice place indeed

Thanks for sharing all that information, very informative